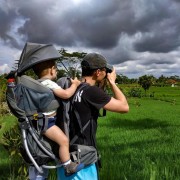 Thinking about Greece may bring to your mind summer, sun, beaches and ancient monuments. Well, you are not wrong. Nevertheless, Greece has much more to offer, especially to those who are willing to look beyond the typical touristic destinations.

The idea of this post came up, because we have visited many caves in Greece (and not only), and we shall be honest there were several that we don’t even remember now. Probably they were just nice, chilly and pretty ordinary for any not first-timers. The truth is that those people who do not have any professional interest in caves (like us) usually want them just to be impressive. And so we made this list of top 4 beautiful caves in Greece, that in our opinion are worth every minute spent inside them!

Just 5 km north of Ioannina city, this cave lays under the Goritsa hill. Being 1.500.000 years old, it was once part of a river shore, when the Pamvotida lake covered the whole Ioannina basin and Goritsa hill was a tiny island. Now, you can enjoy great lake and city views as soon as you exit the cave!

It was used by locals during the W.W. II, to find shelter during bombings. Shortly after the war, it was explored even more, and teeth and bones from cave bears were found inside.

Now, visitors can walk about 1100 meters inside the cave, enjoy the 19 different kinds of stalactites and stalagmites, the columns and curtains made by nature during all these hundreds of thousands of years.

Tip: You can combine Perama cave with a visit to beautiful Ioannina, or explore Zagori villages to the north. Walk around the lake, visit the island in the middle, and you shall find yourself lost in Ottoman buildings, myths, and stories.

This cave was a great surprise during our honeymoon in western Greece! Kefalonia is generally a magnificent destination, including some of the best beaches in Greece, nice architecture and quality food.

Melissani lake-cave is about 2km northwest of Sami, and it’s a unique geological phenomenon. The original cave entrance was created when part of the roof collapsed. As a result, this superb lake with the cave was revealed. Nowadays, there is a manmade entrance that leads to the lake shore, where small paddle boats take the visitors for a small tour. Water is up to 40 meters deep, and there is a small island in the middle, where ancient Greeks worshipped Panas god and Nymphes.

You can hire one of the boats, enjoy the turquoise water under the sun rays, observe the 20.000 years old stalactites and the view from the island to the rest of the lake.

On the easternmost inhabited Greek island, named Kastellorizo or Mejisti, you can find one more miracle of nature. Get to the main port, ask one of the boat owners for a ride and enjoy the route up to the south-east side of the island. Crystal blue water challenges you to dive, but wait a little bit more.

When approaching the cave entrance, the boatman asks you to lean forward, actually to lean absolutely to the edge of the boat. Why? The cave entrance is so close to the sea surface, that there is a place only for a boat to get in. Be cautious, you wouldn’t like those rocks to injure your head.

A few seconds later, your patience will be rewarded! We stayed speechless when we realized how many different shadings of blue exist inside there. The cave, home of monk seals and many fish species in its deep water, has great white stalactites, which change colors when sunlight enters the cave. At the same time, you can swim for a while in the cold turquoise water and admire the huge size of the cave, while you see the tiny entrance!

Best time to visit the Blue cave is during morning hours, and of course with calm sea. When it’s wavy, not even small boats can enter, nature creates a shelter for the creatures inside.

Locals would know Diros caves since 1900, scientists started exploring it almost 50 years later. The natural entrance is just half meter above sea level, while there is man-made entrance so that visitors can walk a bit, then use the boats for most of the route, then walk a bit more again. We admired the whole interior and could not stop taking photos and videos while being guided through big halls, narrow corridors, and well lighted natural formations.

Water depth depends on the sea, is half salty and of course, it’s higher than when the cave was created, hundreds of thousands of years ago. That’s when stalactites and stalagmites were created.

Tip: Be sure to enjoy the visit to Diros caves, while exploring that magnificent part of Peloponnese. You can combine it with Monemvasia, Mistras, Mani, and Messini, among others, before driving north to ancient Olympia. Diros cave is a spectacular sight, don’t miss it!